I grew up in the rural Shenandoah Valley outside Staunton, VA, on a winding, country road teaming with pipe organ-builders. Taylor and Boody Organbuilders is a ten-minute drive from my parents’ farm, and it seemed half the craftsmen who worked there were neighbors. As a kid, I had visited the T&B shop plenty of times for the open houses they’d hold to show off recently completed instruments. I never imagined working there, partly because I did not understand how on earth these craftsmen managed to learn their trade. A bookworm through and through, I only understood how to excel in academics, or in drawing and painting, which I loved.

In the winter of 2011, I was nearing a major personal landmark—graduation from the University of Virginia, on the other side of the Blue Ridge Mountains. Meanwhile, T&B was in the grip of a massive commission: Opus 65, a Bicentennial Organ for Grace Church in New York City. This organ would have numerous pipe shades and other decorative carving elements in a Neo-Gothic style to fit the church’s ornate architecture. John Boody, one of the co-owners, knew from my parents that I was job hunting. Apparently, John thought that my hitherto less-than-marketable penchant for the arts was qualification enough, so he offered me a chance to learn how to wood-carve, and—if I proved adept—work on some of those pipe shades. That’s how I took up a wooden mallet and my grandfather’s newly sharpened set of chisels, and began training at T&B during winter break.

Thanks to my excellent and very patient teachers—Robbie Lawson, Larry Damico, and many others—I was able to learn quickly. Throughout my final, spring semester at UVA, I spent as many days as possible visiting my family across the mountains so I could carve at T&B. When graduation finally arrived, I had a job ready and waiting for me the next Monday morning, and not just any job. A job at a bench instead of a desk. A job that involved chisels, wood chips, Neo-Gothic design, convivial co-workers, and lots of Dolly Parton on the radio. A job with a view of a country church and graveyard, the pastures beyond, and train tracks disappearing into Virginia’s rolling hills. I knew I was lucky.

The shop was a beehive. Or a wasps’ nest, depending on whether tools were being returned to their proper places or not. From the outside, organ-building seems a mysterious and time-consuming pursuit. This impression did not change for me. Even after spending a year immersed in a shop full of craftsmen who loved explaining (better yet, debating) the finer points of organ building, I did not comprehend how one piece of the puzzle connected with the next.

Here’s what I knew for sure: a CNC router would chew a 2-dimensional design across carefully chosen and glued-together planks of white oak. When the router had finished, the wood appeared at my bench looking like a silhouette of the design that accompanied it, on paper. My job was to clamp the wood down, and get to work turning flat crescents into leaves, circles into flowers, and indescribable clumps into crisscrossing vines. When the shade was ready, it was stained a dark color and whisked away into the case.

I won’t get too technical, but for those who are interested, here’s a brief run-down of my most-used tools for this project. My chisels and gouges were Pfiel “Swiss Made” tools. The #7 and #9 gouges were very useful for hollowing out the inner curves on tight, deep curls, while my #3 gouges rounded out convex surfaces and the wider, shallow curves. I also used my narrow #3, held upside down and nudged into the wood at an angle, to create those inverted pyramids that dapple triangular flat spaces in a lot of Neo-Gothic designs. My V-tool (#12) was used mainly to separate one element from another and help create depth, for example, where I had to turn a flat surface into two vines overlapping. In all, I had eight chisels of my own, and a dozen or so that belonged to the shop at my disposal, but these few were the ones that I had to sharpen and strop constantly. For the sharpening processed, I used Japanese water stones.

Beautifully designed pipe shades are important, of course, but as far as music-making is concerned, they are pretty darn peripheral. You don’t have to understand the first thing about making pipes to carve decent pipe shades. In fact, my bench was in a cozy corner of the pipe shop (where, coincidentally, two other women were working at the time), so I was able to witness a lot of fascinating steps repeated over, and over, and over. But, I also had my own job to do. Carving demands close attention. It takes large reserves of creative focus.

I have lost count of how many shades there are in total in Opus 65. My memories are strangely illuminated by delicate blonde curlicues, as if I’d spent the year examining the margins of a medieval manuscript. Endless vines sprout pea pods, button flowers, and dagger leaves. Everything curves. Each fiber in the wood grain is visible under the raking light at my bench. Pale shavings pile beneath my feet. It startles me to recall that the completed instrument in Grace Church displays something very different. There, darkly stained and polished fragments of Neo-Gothic tracery soar high in the air or dissolve into the shadows.

Carving pipe shades (and bas-relief angles, blocky cherub heads, commemorative box lids, and even tiny mice before I had finished) at T&B was a lot of fun, and perhaps the best first job out of college that I could have hoped for.

Yet once my role with Opus 65 was complete, it was time for me to leave. After a year at T&B, I returned to school, this time to get a graduate degree in the history of art and architecture at Boston University. Today, I work as the Assistant Editor at Art New England magazine, and write exhibition reviews and artist interviews for a handful of other publications. It’s a wonderful job—again, I’m lucky to have it. But there are times, when I am at my computer, my eyes tired from the screen’s harsh, blue light and my heart dismayed by a blinking cursor on a blank Word document, when I can’t help but think very fondly about my carving job: tired feet, splinters, dirty blue jeans, endless piles of wood chips, and all.

A link to the specifications for Grace Church:
http://www.taylorandboody.com/opus_pages/opus_65/specification.html 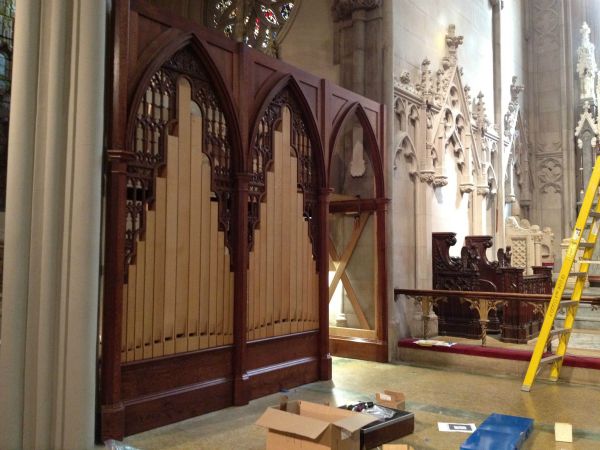 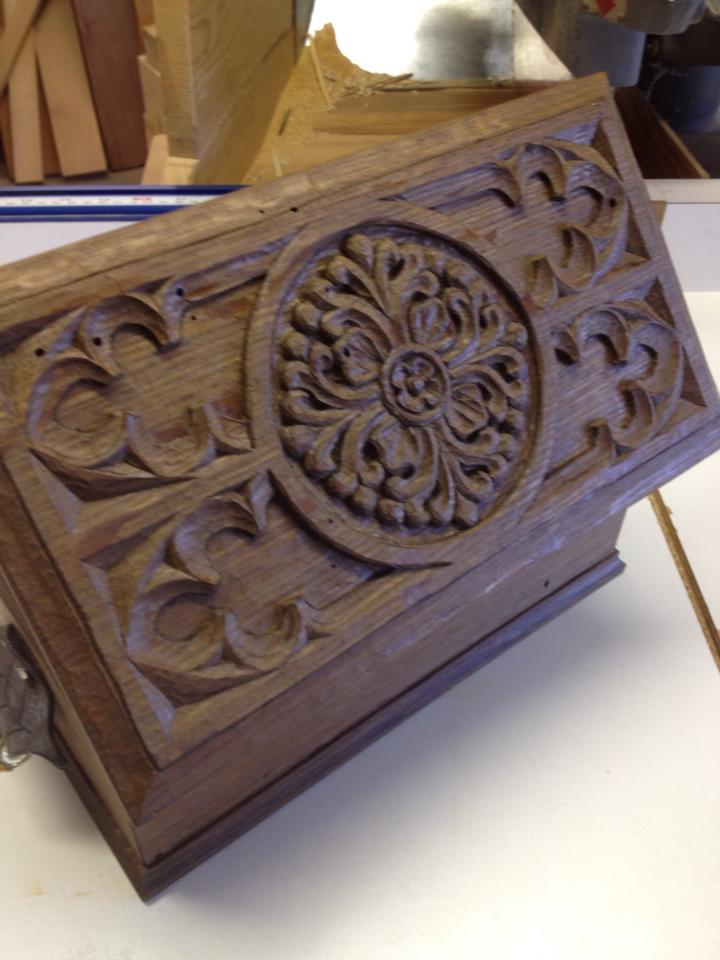 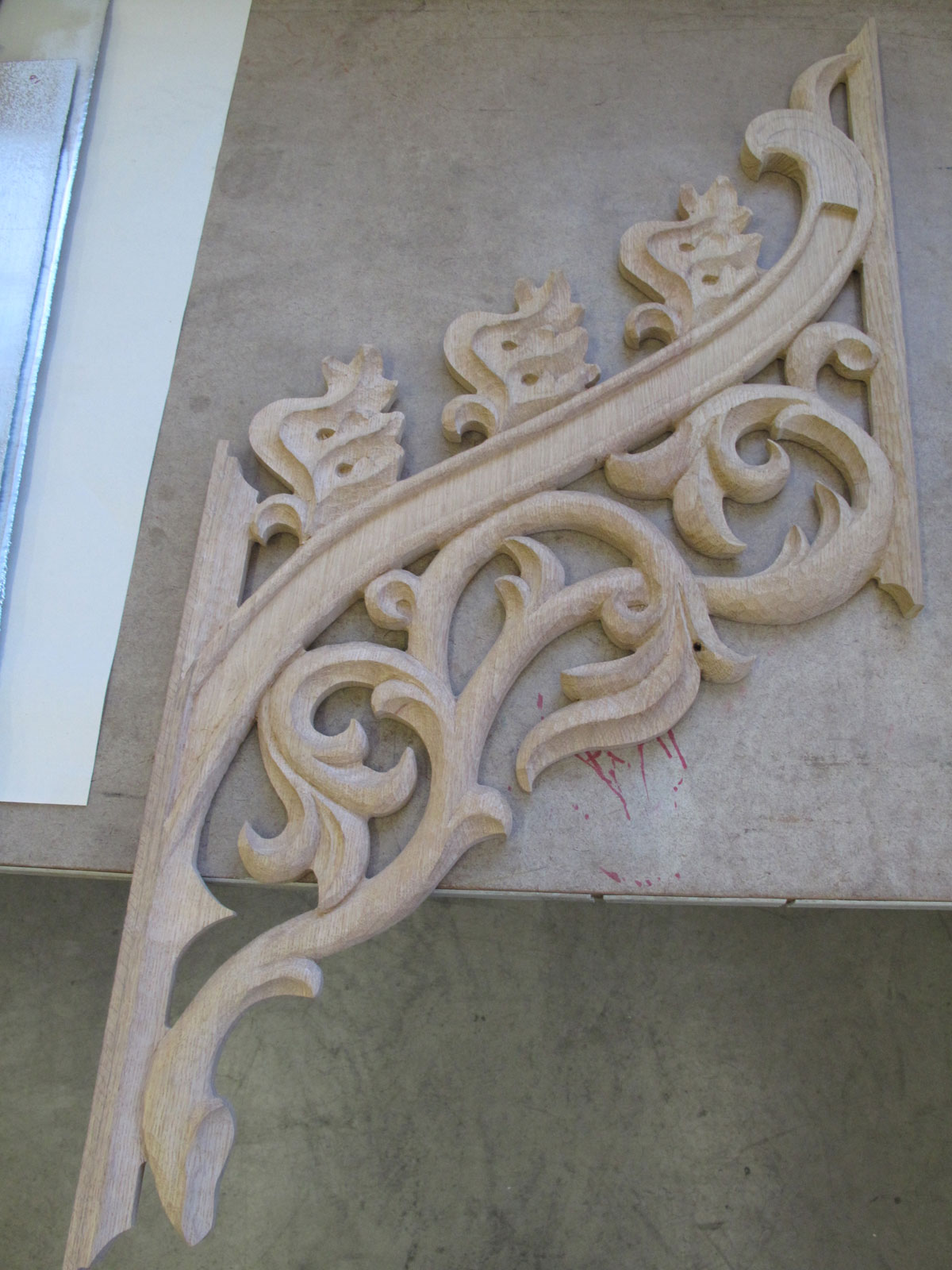