BE A NUISANCE. NEVER GIVE UP.

In the past few years, I have come face-to-face with retirement, and not by my own choice. My place of employment for the last 25 years, The University of Montana, has been dealing with continuing financial problems, and I, a perpetual adjunct, was at risk. Worse than at risk, I was told that, short of a miracle, I would not be rehired in the fall of 2017.

I’ll spare you all the drama and cut to the chase: at the eleventh hour, a dear colleague who is himself near retirement, agreed to cut back to ¾ time in order to fund my .5 adjunct status, until his own retirement in a few years.

So I’m back in classes and lessons, but I’ve seen the future, and my perspective is now quite different. For a year, I gave up the thought of any academic future, and started looking elsewhere. I was looking at the possibility of 20 productive years, yet ahead of me. What did I want to do with them?

First, I found a research topic six years ago that is endlessly fascinating to me: a relative I never met, my great-aunt Anna Maude Van Hoose, who had a 40+ year career as a professional pianist. I knew very little about her when I began exploring her life, and I have uncovered more than I ever imagined about her remarkable life – touring the US on the chautauqua circuit, accompanying dance troupes in the ‘20s in Los Angeles, playing Spanish repertoire with a Hispanic singer in the Southwest in the ‘30s, and working as a rehearsal pianist in Hollywood for at least one film – which just happened to be The Wizard of Oz, for which she supposedly rehearsed the “Lullaby League” choreography.

After presentations for regional and national conferences, and numerous publications in state historical journals, I’m focusing on a book. Or two. This research could last the rest of my life – or longer! It has been a gift to me at a very stressful time and I am more thankful than I can express for the remarkable life story of a relative I never met.

My other sense of purpose is more directly related to my career: I am concerned about women in church music, and women organists in academia, as we probably all are.

I think all of us want to make the world a better place, in whatever ways we can. We all probably hope that when we retire, we will see the next generation stepping up to take our places, and we hope to be able to rest assured that our work will continue.

I have come to realize that in the organ world, this is not a given, and I want to share with all of you what I have found out:

First, in my specific denominational work (as a church musician in the Episcopal church), I was horrified to learn that less than ten women hold full-time positions in Episcopal cathedrals, yet there are well over 70 Episcopal cathedrals that employ full-time musicians. These statistics are anecdotal: I counted the available listings in the Association of Anglican Musicians directory, and supplemented the info by visiting websites for the rest of the cathedrals.)

Next, regarding academia: I was saddened, but not surprised, to learn as of last month, according to the constantly-updated records of the College Music Society, there were 737 male organ teachers in American colleges and universities, and 383 women; this represents all teachers, from part-time to fully tenured professors.

Last, I was stunned to learn that, according to a 2015 survey of the entire AGO membership, the male-female ratio has dropped precipitiously: 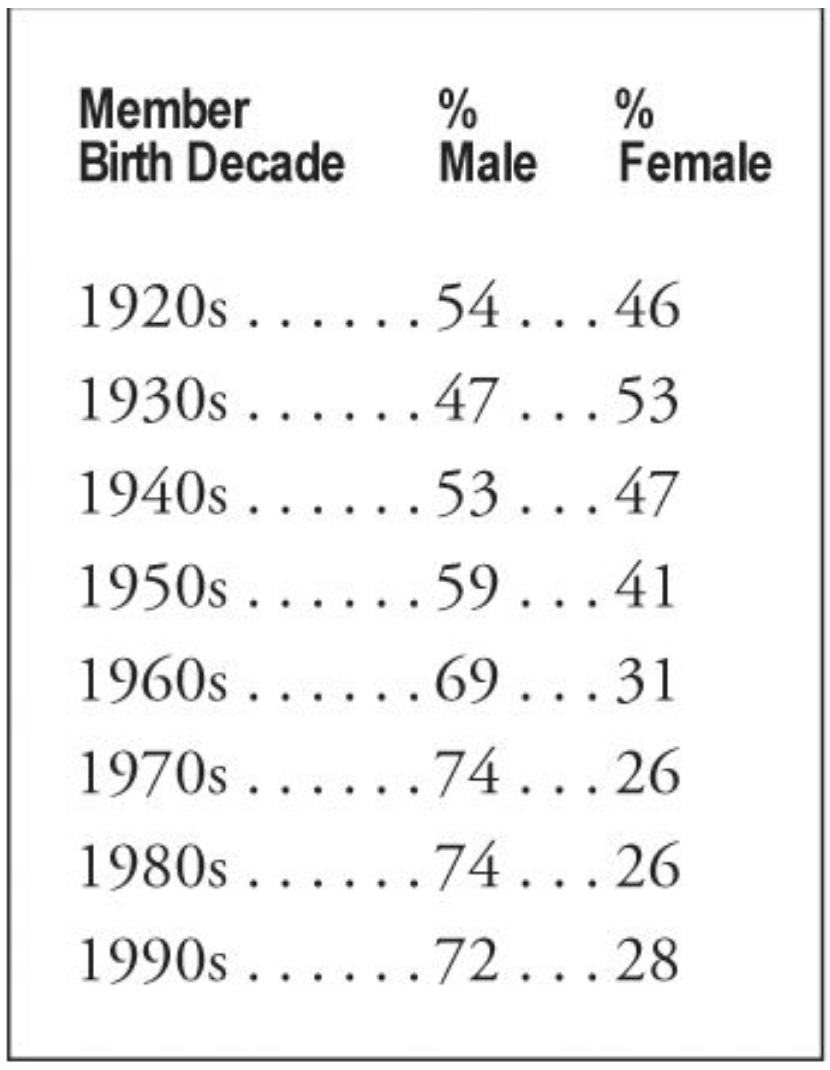 The statistics for older members is understandable (given, for example, that the US population of 85 year olds is twice the number of women as men). However, I had never been aware just how skewed the numbers had become over time: the 2010 census reported the US population as 50.8% female and 49.2 % male, but AGO’s youngest members (those 28 and under) are 72% male. Women are only a little over a fourth of the AGO membership under 48.

The reasons for this are numerous, I’m sure, and most certainly worthy of study. I don’t have a clear idea of how to go about that, but I do know that it can be done, and I want to help make it happen.

With my remaining years of productivity, I have some new goals:

Fight to get the discussion started. Where are the young women?! Who is working to encourage them? In asking AGO what had been done to address the skewed numbers above, this was the response: “…the National Council has not made any effort to focus in on the fact that 70% of the youngest generation of Guild members are male. We didn’t discuss that or form a committee to address that particular finding….” We should all be asking, “Why not?!”

Fight to be heard. The AGO demographics are not all right with me. It is not all right with me that my own alma mater, Eastman, sent out a summer school brochure in which every single one of their summer programs included male and female teachers except the organ program. This is just an example – I’m sure you have some of your own. I encourage you to write and let your voice be heard.

An unexpected aftereffect of the Marjorie Stoneman Douglas massacre in Florida was the overdue recognition now coming to Douglas herself. Many of you may have seen this quotation of hers, but it bears repeating in this context:

Be a nuisance where it counts; Do your part to inform and stimulate the public to join your action. Be depressed, discouraged, and disappointed at failure and the disheartening effects of ignorance, greed, corruption and bad politics – but never give up.

So, as the semester comes to a close and I look ahead to just a few years before retirement, I see more research in my future. I see a book or two, a few more articles. And I see a LOT of correspondence. I’ll be writing various AGO officers in the near future, pushing for some official response – long overdue! — to that 2015 survey. I’ll write the Dean of the Eastman School (again!), asking how he plans to address the need for women organ students to see a female face on their faculty, so they see proof of the feasibility of their career goals. And I’ll working for the creation of a task force in the national Episcopal Church, to examine the status of women church musicians. I hope you’ll join me; I’d love to hear about your own campaigns for equity in hiring practices, in performance opportunities, in all aspects of our professional lives.

Keep at it, sisters. Never give up.

Nancy Cooper has been a member of the music faculty of the University of Montana in Missoula for 25 years. She is also the organist and choir director at Holy Spirit Episcopal Church in Missoula. Her articles about Anna Maude Van Hoose have appeared in the Journal of the International Alliance for Women in Music; Montana: the Magazine of Western History, and the New York History Review; more are upcoming in the New Mexico Historical Review and North Louisiana History. She has presented on Van Hoose at regional and national conferences of the College Music Society and the Western Association of Women Historians.
Contact Nancy at nancy.cooper@umontana.edu and read more about Anna Maude at Cooper’s research blog: www.chautauquachronicles.wordpress.com