I’ve had the pleasure now of performing and/or recording on at least four of the oldest organs of the world: Sion, Switzerland (1435); Rysum, Germany (1457); Oosthuizen, Netherlands (late 1400s); and Krewerd, Netherlands (1531). I’ve visited and tried other Renaissance/early baroque organs, but these I’ve really had the luxury of getting to know at length. And of course I must post the disclaimer that most of those dates are still under some discussion.

Much like the difference between a Renaissance shawm and a baroque oboe, these early/late Renaissance instruments all have a distinctive sound. It is characterized best as strong and very present. But each of these organs have distinct points of view.

The Sion organ, located in the Basilica of Valère, is only reachable from a climb up one of Sion’s two distinctive hills from a parking lot halfway up. The organ is located in a “bird’s nest” with the bellows in an adjoining attic space. (The outside of the organ case has truly wonderful graffiti from several centuries back). It is the most distinctive sounding because if is truly a 4’ blokwerk that has been broken up a century or so later into separate stops. To find the appropriate registrations, one must really embrace the 4’ as the foundation stop. The music desk requires those ever-so-special reading glasses because it is literally in front of your face (and totally blocks one’s sight of the keyboard as well). Somehow, one quickly adjusts one’s ears to the 4’ pitch level and it sounds perfectly normal. The huge stone basilica puts a wonderful aura around the sound – like so many of these historical organs, they are a perfect match of organ + space. I feel so fortunate to have performed there twice in recent years. My hope is that someday soon the temperament will be restored to meantone.

Just last summer I performed on the organ in Rysum. I had played it a few times before, and even made a small Youtube on one visit. But last summer I was fortunate to play an actual concert. It also has an in-your-face music desk, and the most interesting thing is that the Principal is controlled by a lever coming down from above the music desk; the rest of the stops have typical stop knobs. Rysum is a small church, all in wood, so it does not have the mystique of a large stone cathedral in the sound. But each stop is quite wonderful. I hope to return soon and make another recording there.

Oosthuizen was a very special discovery. Of course one reads about these organs online, but when I visited, it quickly became one of my favorite instruments, and I did eventually record a CD there. (And the caretaker, Hermann, is a wonderful man.) The acoustic is large and warm; the church has painted stone walls but a wooden barrel ceiling, a combo that perhaps is a factor. And the organ has an unusual range! Just 3 octaves and 2 notes, F above cello low C, to F 3 octaves above, plus G & A just above that (no F# or G#). When I decided to record there, I truly thought finding repertoire might be a bit of a problem. But not at all – in fact, I brought tons of extra music, it all sounded fantastic and my original intent to record half a CD became easily enough music for a whole CD.

I played some interesting intabulations, most notably the 20-minute intabulation of Josquin’s Miserere, and discovered some interesting things. The intabulation has many repeated chords which seem awkward/unfortunate on a more modern organ. But at Oosthuizen, it felt like the church building was working with me: one plays the chord, then as it starts to die out (not too quickly in the acoustic!) exactly there is written a repetition of the chord, which just floats out over top of the previously played chord without making a big interruption. And the sound is one of the most strident, shawm-like sounds yet I never got tired of it. Putting just the 8’ principal on produced a loud, full tone. Adding the 4’ only increased the sound a tiny bit – and so forth for each stop. They never seemed to add up to a much greater sound than just the 8’ principal alone, but the color changed. So different, and so fascinating.

Krewerd is really a similar – one might say LOUD – sound. But it’s a tiny church building, so those 7 stops just turn into a massive big organ presence. I love the painted wings for the case, and the panels that list the donors of the organ as well of those who paid for each of the restorations (1620, 1687, 1731, and 1857). Names of the donors prominently displayed – sounds like academia, doesn’t it? I especially like this one: “The noble well-born lady Margarita Elisabeth Ripperda…had this organ renewed in 1731.” The organist sits, very unusually, at the back of the case – probably so as not to be deafened by sitting in front of the pipes! The first time I played the organ, my Dutch hosts politely requested I refrain from using “all those stops” because their hearing might suffer!

Right now, Krewerd is an endangered organ. The recent earthquakes (due to the large amount of natural gas harvested underground in the past 50 years) in the Loppersum area have put cracks in the church structure, directly over the organ. I have heard that a plan is being created to save the organ by removing it to a museum. However, like all these organs, it is such a perfect marriage of organ and space that much will be lost if this comes to past.

Each of these organs has an unusual and distinctive personality – to me, they are like good musical friends, quirky friends, but loyal and hardworking friends too who eagerly collaborate with me each time I perform on them. I am fortunate indeed to have made their acquaintance! 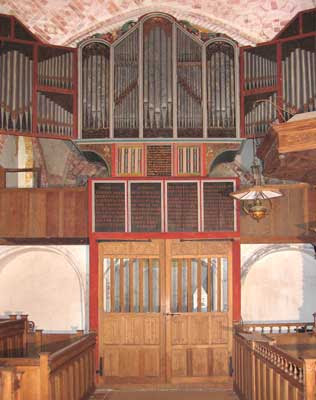 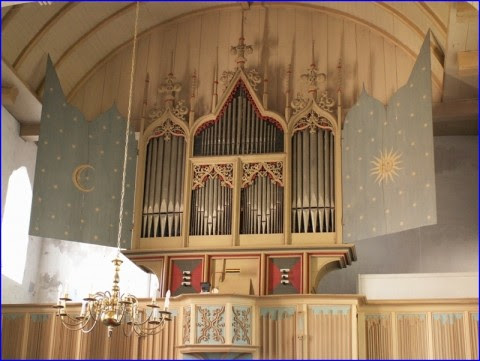 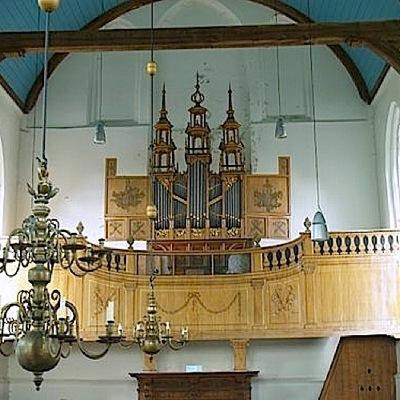 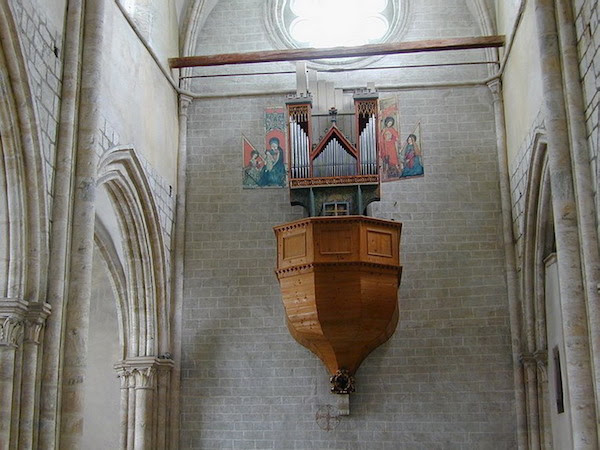