A Song Cycle in a Hybrid Genre: Haven: Songs of Mystery and of Memory 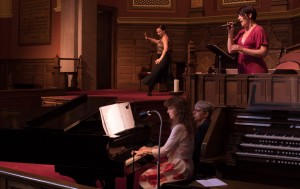 A Song Cycle in a Hybrid Genre:

Haven: Songs of Mystery and of Memory, for mezzo soprano and piano, is a cycle of 16 songs for which all

music and texts are original compositions. This cycle draws inspiration and influences from a multiplicity of

blues. The texts—and the moods evoked by the music—depict a landscape of experience, memory, and

emotion. The element of “mystery” is that which is understood better by the heart than by the mind, and is best

left to the expression inherent in musical language. The “memory” is the original impulse that the mind stores

and carries with it through all that follows. The songs are arranged in a sequence that moves from memory to

mystery in the not-quite-straight line that the landscape of human emotion tends to encourage.

In February of 2013, I was improvising at the piano one evening, after a long day of teaching, meetings, and

practice. For no reason that presented itself at the time, I had an idea that combined a melodic fragment with a

text fragment (“If I had you…”). This fragment “arrived” as a companion with the melodic material, and from

this nucleus the entire song unfolded over about four hours. I simply wrote it out in approximately the amount

of time that it took to commit it to manuscript paper with a pencil. Upon examining the song in its final form, I

decided that its title should be “There would always be a song,” as this was a repeating phrase that regularly

completed recurring text material in the “chorus.” I performed this song with mezzo soprano Katherine Byrnes

as part of a memorial service for a close friend on March 2, 2013. Listeners expressed positive reactions to the

song, and I was aware that the musical materials represented a mixture of genres that outlined a stream of

experiences, studies, and influences in the development of my language as a composer. Almost immediately

after this experience, a second song suggested itself at the end of an organ practice session in Holsclaw Hall at

the Fred Fox School of Music at the University of Arizona, where I am professor of organ/music theory. I had

been practicing in the organ hall, which houses a three-manual Schoenstein organ that I am fortunate to have in

my regular teaching habitat. The stage also holds a Steinway grand piano, to which I felt drawn at the close of

my organ practice time. The impulse was connected to a harmonic progression that seemed to arrive

unannounced. As I played and developed the progression at the piano, the “poetry” of the text simply lined up to

match the contour of the rhythm. Within a few hours, this song (“Haven”) was completed and notated. The

progression is rather dark, intensely emotional–and is ultimately a litany of thanks to an individual who is a

The third song, “These eyes that see,” arrived with more of an element of surprise than in any other case within

the 16-song cycle. I was at a stoplight, in the middle of a drive to the north side of Tucson, when the text began

to take shape so quickly that I pulled a white envelope from my handbag, along with a pencil, and used the

center of the steering column as a “backing” for jotting down the text. By the time I returned to my house after

the appointment, I essentially had the text completed. From the moment that the first line presented itself (“No

touch so much consoles as the light in your eyes…”), it was intimately bound to its melody. Again, this work as

a whole “showed up” in exactly the amount of time that it took to notate it. Within days, “I don’t know how to

do this” was also completed. “These eyes that see” is a tango, but also with a somewhat traditional alternation of

verses and chorus material (with something of a solo piano ritornello) that characterizes a song design. Its

tells the story of its meaning. “I don’t know how to do this” is a fast-moving, passionate evocation of the soul’s

confusion in finding its way through unusual times that do not offer easy directions.

At this point, four songs had developed and reached completion within approximately one month, at about the

rate of one per week, with each one taking about exactly the time required for securing the notation. There was

of its own. The developing cycle was following principles that belonged to a fusion of genres that I had

experienced as performer, composer, and/or both. There was a definite presence assumed by “classical” art song

attributes and years of experience as a vocal accompanist. Other genres—as described at the beginning of this

article—related to long experience as a soloist, recitalist, and composer. One characteristic stood out as a

primary element in the cycle: each song was designed to work well as a work for mezzo soprano and piano,

complete with text that would work as both poetry and song lyrics—and at the same time, each song could stand

as a work for piano solo. Eventually, the entire cycle conformed to this description.

As 2013 unfolded, songs continued to “arrive” according to the described pattern. Twelve additional songs took

shape in the time from April 8 through October 10. In all, sixteen songs developed within a period of nine

months. I still find this experience to be one of surprise and mystery. I could be practicing other literature,

traveling, riding the exercise bike, working on other projects, etc., and within minutes I would be finding the

nearest piano so that I could simply write out the next song. Much of the material—text-related and musical—in

these works arises mostly from a realm of emotion, and from a place of memory. The “memory” within the title

emotion—and often of pain and isolation—that needed song as a vessel. The “mystery” within the title was that

no apparent seeking or contrivance seemed to be involved when the songs materialized, as it were; and it also is

a reference to mysteries that remain impossible to explain only in words. This was as puzzling to me as it

appeared to be to colleagues who were aware that I was working on this project. I still can only explain this

made of separate and widely varying harmonic, melodic, and rhythmic vocabulary elements. I mostly tried to

the process. It seemed that extensive training and experience in counterpoint (sixteenth-century and eighteenth-

century, which I also have taught at the university level for many years), functional harmony, composition, and

balanced. I must state, too, that I feel thankful to (and for) the many influences and experiences that led to this

unusual situation—and to the source(s) of inspiration that made it possible.