Renaissance Roman architecture. The first hint that this space is musical comes as you glance up at the

buttressing, fashioned in the shape of massive ‘scrolls’ that look like they might have come right off the

necks of cellos. Once inside, the generous and clear acoustics of the room beckon singing. The room

singing, and organ music. Standing in the middle of the nave, the tall gold-leafed, crucifix features Christ

looking upward in hope, rather than downward in grief. Christ’s pose draws the eye upward toward the

Feast of Saint Cecilia Day, November 22, a declaration of her fidelity to God. High above, just below the

reflecting the room, and lead façade pipes with golden mouths, poised and ready to sing!

central role in the music ministry of the cathedral, the Archdiocese of Omaha, and in the civic life of

Omaha. At its core are twenty-nine stops spread over two manuals tuned in quarter-comma meantone

temperament. The instrument has mechanical stop action, four wedge-shaped bellows that can be foot-

stops. This is accomplished by having eight additional pipes per octave in each of the meantone stops

pipes to be available to the wind. Both temperaments are used regularly, but I tend to select meantone

stops in my service-playing whenever possible. If a piece strays from the available pitches or requires

additional registration for romantic or modern music I move to the well-tempered stops. The constant

presence of purely tuned intervals in the ears of choristers and worshippers has had a calming, peaceful

and very positive effect on the community over time. For the choir, it has given them an aural model of

Omaha, now a metropolitan area with population of 1 million people, was described in 1856 as a

“mudhole,” a settlement developed around the increasing activity on the Missouri River, and a

launching point for pioneers who traveled westward in search of a homestead. In the church, women

served as musicians from its earliest days. A family named Burkley came to Omaha via riverboat from

Columbus, OH, traveling down the Ohio, and then up the Mississippi and Missouri rivers. The parents, a

daughter (Cecilia) and her cousin formed the first choir, a quartet capable of singing the Latin chants for

a Solemn high mass so that the first cathedral could be consecrated. Cecilia Burkley was its first

organist. On the way to Omaha, she stopped in St. Joseph, Missouri, en route, in order to study organ

with the Benedictines. St. Cecilia Cathedral has an unbroken tradition of choral singing since 1856.

vibrant energy and a high standard of musicianship to St. Cecilia Cathedral, founding a choir school in

the English tradition. From Omaha he went on to serve churches in Canada and New York, eventually

Silby, “friend him” on Facebook, as a page is dedicated to his life and musical work.

founder of Boystown, served as Cathedral Organist and Choirmaster. She was an Omaha resident who

took her organ playing seriously, traveling periodically to Philadelphia to study at the Curtis Institute.

Jumping closer to the present, from the late 1990s through 2007, two large financial gifts and several

Cantorum, whose charge was to develop an exemplary music ministry in honor of the patron, Saint

Cecilia. The Schola Cantorum was directed by Dr. Kevin Vogt, who was initially hired by the Cathedral as

Organist and Director of Music. Vogt and Martin Pasi worked together to develop the concept of the

Cantorum. This ambitious program, at its height, fostered collaboration between the Cathedral and the

Archdiocese of Omaha, with the mission of forming children, youth, and adults for life-long praise of

God. In addition to the executive director, a full-time collaborative staff was hired, including a

choirmaster, a cathedral organist, assistant organists, and a children’s music specialist. In addition, the

institute sponsored interns who were graduate students at the University of Nebraska, Lincoln. For a

Embodiment of Harmony: A History of Organs in the Roman Catholic Cathedrals of Omaha Culminating

in an Organ by Martin Pasi with Two Temperaments.”

THE BUILDING AND ORGANS

The current cathedral, Saint Cecilia, stands majestic atop one of the Missouri river bluffs facing West.

Designed by local and internationally famous architect, Thomas Rodgers Kimball, it was the third

cathedral in the Archdiocese of Omaha, which is one of three diocese in the state of Nebraska. The

cornerstone was laid in 1907. It took fifty years to complete the construction process. A major

renovation in 2000 brought the cathedral to its present state.

The first organ serving the Roman Catholic Church in Nebraska was a melodian, shared between the

Episcopal and Catholic cathedrals, wheeled between the two churches on a weekly basis on a horse-

drawn cart. In 1917 the cathedral installed a Casavant Organ, one of only two extant instruments built

by the ‘United States Casavant’ company, the result of a brief incorporation in the US. The present

THE PRESENT-DAY MINISTRY FORMATION FOR LIFELONG PRAISE OF GOD

taken under the wing of the Archdiocese in 2007. The ministry has three related components: (1) the

Cathedral Music Ministry, responsible for providing music at weekly and holy day liturgies for the parish,

flute, and guitar as well as teaching course-work including basic improvisation, keyboard harmony,

are all carried out under the auspices of the Saint Cecilia Institute for Sacred Liturgy, Music, and the Arts.

The Saint Cecilia Institute (SCI) is housed in the upper floor of the Cathedral Cultural Center, the

www.cathedralartsproject.org) including a museum detailing the history of the archdiocese, an art

gallery, a lecture hall, a parish center dining room, and a gift shop on the ground floor. The Saint Cecilia

Institute is located on the top floor of the Cultural Center. This space includes a large and smaller

rehearsal room, four classrooms, a music library and archive, an organ and piano practice room, a

vesting room, and an office suite. In support of the mission to educate church musicians in the

Archdiocese through classes and lessons, the Cultural Center houses two studio organs, including a ten

located in the principal choral rehearsal space, and a Holtkamp “martini” practice instrument.

The Saint Cecilia Institute provides formation for church musicians in the Archdiocese, including larger

initiatives that reach out to musicians in the ca. 140 parishes in Northeast Nebraska. With half of the

diocesan parishes being rural, there are satellite locations that host lessons and classes. The

Archdiocesan Music Ministry has recently established, through an initiative of Archbishop George J.

Lucas, a Core Repertoire for the Archdiocese, including a newly commissioned mass setting – Mass in

Honor of Saint Cecilia from David Hurd, and antiphons from J. Michael McCabe together with a list of

‘hymns all people should know’. (http://www.archomaha.org/ministry/office-divine-worship/music-

section leaders. The choir’s mission is to sing for the parish liturgies of the 1200 family parish

community, for all Episcopal liturgies at the cathedral at which the Archbishop presides, and to present

an annual series of concerts. The professional musicians also sing separately from the cathedral choir as

the Schola Caeciliana. Finally, a quartet from this ensemble entitled Canticum sings regularly at liturgy.

There is a significant focus on preparing musicians to sing the church’s treasury, which is identified

repertoire from the church’s heritage.

For archdiocesan events (ordinations, services with the Archbishop) parishioners throughout the

archdiocese are invited to join the Archdiocesan Chorale. There is also an RSCM graded youth choir

(AYC) program that incorporates training in solfedge, sight-reading, and vocal production. The members

metropolitan Omaha. In recent years many homeschool students have participated in this choir. The

AYC rehearses weekly and sings both for liturgies at the Cathedral and at parishes, providing inspiration

and modeling for choral music in the diocese. An extension of the choir school model initiated earlier

by the Schola Cantorum, numerous youth have continued in their studies and are currently studying in

One of the principal goals of the entire music program is formation for lifelong praise of God. Likewise,

one of the core activities of the choirs is not just ‘preparing for prayer,’ but being a community of

prayer. The Church’s heritage of daily prayer in the liturgy of the hours forms a consistent platform for

patterns of rehearsal. For more than a decade, whenever the choirs gather, one of the hours is chanted

(compline for adults, matins for Saturday rehearsals, and vespers for the youth choir.) This means that

the chanting of psalmody is not just a repertoire requirement, but part of the choir’s mission of prayer.

appreciated, but that communal living requires an element of sacrifice for the sake of the community.

Each participant is expected to bring their gifts to the table and, through our common efforts, their gifts

are transformed, resulting in a ‘new creation.’ This concept of mutual sacrifice functions at the same

time as a theological, pastoral call to service, and in a practical way, fosters musical listening, heightened

awareness of the other, and the reception of gifts. One beautiful result of this discipline is the creation

of a blended choral sound. With a continual focus on education, formation, and growth, our

participants include a large number of young people, including members of the cathedral choir itself,

which welcomes singers of any age who can sing the literature.

A key component of the music ministry is the Internship program. Internships serve as a way to engage

young participants while making music study more affordable for families. The organ studio at the

institute was launched with the inauguration of the Pasi Organ. From its inception, it has been very

active and presently includes a dozen students. Several of the students exchange work for their lessons,

giving them an opportunity to become more deeply involved in the music ministry. This can include

activities such as receiving tutoring in liturgy, working in the music library, and managing the website.

Gradually these young organ students begin playing in the liturgy.

I feel an overwhelming sense of gratitude for the tremendous gifts that have been shared, the

collaborations initiated, all of the previous music directors and staff who have with clear vision guided

the music ministry at Saint Cecilia Cathedral. Most particularly, I am grateful for my immediate

predecessor, Dr. Kevin Vogt, for envisioning a music ministry that both serves the liturgy, and also seeks

to engage and form the whole person. All those who have been involved as faculty, staff, volunteers

and paid musicians have contributed significantly to the ongoing success of the music ministry.

At some point in the future, I look forward to hosting a conference that explores the special role that

women play in the musical life of the church, and to do this within the context of a cathedral named for

the current music director is a woman. As I reflect on the music ministry as a whole, one of the most

rewarding parts of my job are those quiet moments when I practice in solitude at the Pasi organ. In a

very real sense I believe that this organ has a feminine character. Its lyrical voicing, in dialogue with the

various musical references present in this space, helps makes palpable a mystical connection to our

patroness, Cecilia. From the bench one looks high to the left and right on the side walls to see crests

that the art practiced in this place is not perfunctory, but connected to the tradition of our patron saint

of music, herself. For Cecilia, music served as a metaphor for her ultimate harmony with God. I have

and vocal sound, all of which functions within this lovely space and generous acoustical environment.

The tremendous gifts found in this place truly do bear fruit in the form of beauty and joy. O Caecilia 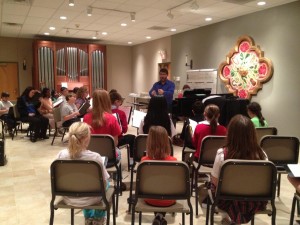 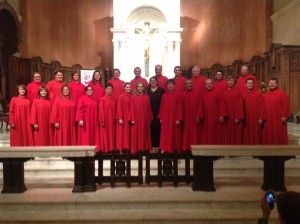 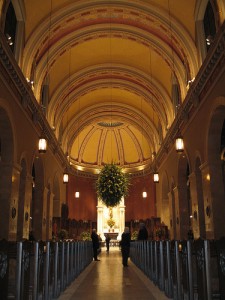 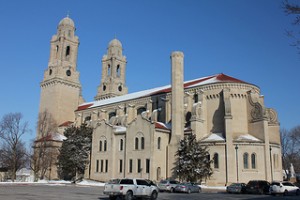 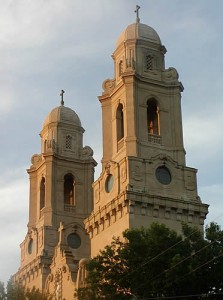 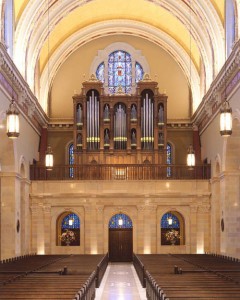