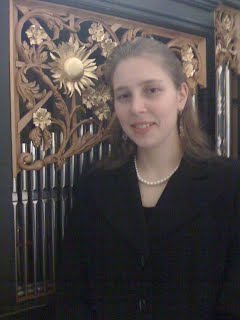 Originally from New Jersey, Sarah Jane E. Starcher currently lives in New York City and is Sunday organist at the Church of the Holy Innocents in Midtown Manhattan.  Ms. Starcher began her undergraduate studies as an organ performance major at the Peabody Conservatory of The Johns Hopkins University in Baltimore, Maryland.  She continued her studies at Columbia University in New York and will graduate this May with a degree in music.  Her academic interests include the liturgical history of the organ, sacred choral music and traditions, and the intersections between chant, organ literature, and improvisation.

Throughout her college career, Sarah Jane has been committed to maintaining a dual academic and performance focus, studying organ privately with David Enlow.  At Holy Innocents, she plays for the Traditional form of the Roman Catholic Liturgy, where the professional choir sings a full Mass Ordinary setting and Gregorian Proper each Sunday.  Prior to moving to Manhattan, she held church positions in New Jersey and Baltimore.

In the summer of 2011, Sarah Jane presented a workshop entitled “Beyond the Notes: Exploring Organ Repertoire in its Historical, Musical, and Biographical Context” at the American Guild of Organists Region III Convention in Harrisburg, PA, as winner of the AGO Region III Young Organist Workshop Competition, Division A.  She performed in the 2013 Chevy Chase Presbyterian Church Bach Marathon in 2013 and in July of 2008, at the National Association of Pastoral Musicians (NPM) Young Organist and Pianist Recital at the NPM Regional Convention, in New Brunswick, NJ, as one of the five 2008 Student Keyboard Competition winners.  On April 30, 2014, Sarah Jane will play a lunch time recital at Trinity Church, Wall Street, in New York City.  She is a member of the AGO, New York City and Metropolitan New Jersey Chapters, and the Church Music Association of America.