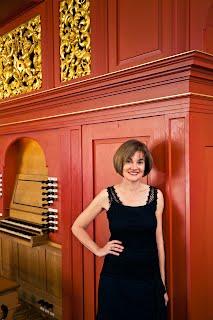 Kimberly Marshall maintains an active career as a concert organist, performing regularly in Europe, the US and Asia. She has held teaching positions at the Royal Academy of Music, London, and Stanford University, California. Winner of the St. Albans Competition in 1985, she has been invited to play in prestigious venues and has recorded for Radio-France, the BBC, and the Australian Broadcasting Corporation.

Kimberly Marshall has performed throughout Europe, including concerts in London’s Royal Festival Hall, St. Paul’s Cathedral and Westminster Cathedral; King’s College, Cambridge; Norte-Dame Cathedral, Paris; Chartres and Uppsala Cathedrals, as well as the Dormition Abbey in Jerusalem.  She has also performed on many historical organs, such as the Couperin organ at Saint-Gervais, Paris, the Gothic organ in Sion, Switzerland, and the Cahmann organ in Leufstabruk, Sweden. Her playing is informed by research into obscure repertoire and performance practices.

During the summer of 2013, Kimberly Marshall was invited to present the keynote lecture for the inauguration of the new “medieval” Van Straten organ at Amsterdam’s Orgelpark, as well as to serve as Artistic Director for an academy of contemporary organ music in Göteborg, Sweden. While at Stanford and the Royal Academy of Music, she gave performances of organ works by Ligeti in the presence of the composer, and she has been an advocate for music by Margaret Sandresky, Dan Locklair and Ofer Ben-Amots.  She is attracted to the organ by its vast possibilities of timbre and by the instrument’s complex development since its invention in the third century BCE.  Her work reflects this enthusiasm for musical creativity and historical awareness.

Dr. Marshall’s compact disc recordings feature music of the Italian and Spanish Renaissance, French Classical and Romantic periods, and works by J. S. Bach.  Her most recent CD celebrates the music of Arnolt Schlick on the 500th anniversary of its publication (2012). A CD/DVD set entitled A Fantasy through Time, was released on the Loft label in 2009, receiving effusive reviews, as did her recording of Chen Yi’s organ concerto with the Singapore Symphony on the BIS label (2003). Her expertise in medieval music is reflected in her recording, Gothic Pipes, as well as through her scholarly contributions in such publications as the Grove Dictionary of Music and the Oxford Dictionary of the Middle Ages.  To increase awareness of this repertoire, she published anthologies of late-medieval and Renaissance organ music in 2000 and 2004.