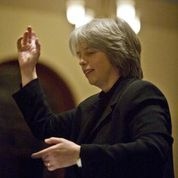 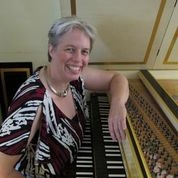 CHRISTINE GEVERT, organist, harpsichordist, and conductor has lived and worked in South and  North America and in Europe. She is an Early Music specialist and also has developed a career performing, improvising, arranging and composing traditional and contemporary sacred music and a fusion of classical music with pop, rock and folk.
She has performed as solo organist on many historical instruments in Germany, Switzerland, and Santiago de Chile. As continuo player and small ensemble singer she performed all over Europe with chamber music ensembles, vocal ensembles and choirs and her own Baroque Duo, Les Inégales, founded in 1995. She taught Basso Continuo and Historically Informed Performance Practice at the Berliner Kirchenmusikschule for several years, and has taught workshops and masterclasses in Early Music in Europe, South America (Pontificia Universidad Católica in Santiago, Chile) and the U.S. She has recorded with Berlin label Carpe Diem on historic organ and harpsichord. She has released over seventy Basso Continuo realizations for Amadeus editions in Switzerland.
In 2003 she founded her own music organization in the U.S., Crescendo, composed of an auditioned amateur chamber choir with a professional core group of singers, a chamber orchestra of period instruments and smaller vocal and instrumental ensembles. Important part of Crescendo’s mission also is education in the form of masterclasses, workshops and educational events at schools and other venues for amateurs and professionals of all ages. She has conducted several U.S. and east coast premieres of large scale baroque works, such as Zelenka’s Missa Votiva ZWV 18, Telemann’s Kapitänsmusik (1730), Biber’s Requiem à 15 and cantatas and motets by Johann Ludwig and Wilhelm Friedemann Bach, Christoph Graupner, Franz Tunder and works of the Polish and Latin American Baroque periods. Last year she premiered two choral works on Chinese poetry by New England composers, commissioned for Crescendo.

Born in Hamburg, Germany, and raised in Santiago de Chile, at the age of 19 she became the music director of the main English speaking Santiago Community Church. She toured Chile and Argentina as organ soloist and accompanist and as assisting conductor of the chamber choir Collegium Josquin, performing mostly Renaissance and Baroque repertoire. Her teacher and great mentor in those years was organist and conductor Alejandro Reyes van Eweyck. She earned a bachelor’s degree in music theory from the Conservatorio Nacional de Chile. With a scholarship of the German  government (DAAD) she moved to Hamburg, where she studied organ with Wolfgang Zerer, and Early Music with Gerhart Darmstadt at the Hochschule für Musik und Theater, Hamburg, earning her master of art degree in 1992. She then went on to study choral and orchestral conducting in Berlin with Martin Behrmann and harpsichord in Leipzig and London with Nicholas Parle. She attended masterclasses with organists and harpsichordists Bob van Asperen, Ton Koopman, Colin Tilney, Paolo Donato and Harald Vogel, and with conductors Hermann Max and Max Schieri.

In 2001 she moved to the U.S., where she has performed and taught at the Amherst Early Music Festival, Music Mountain, the Berkshire Choral Festival and Bard of Simon’s Rock College. In 2012 she performed at the Washington DC Early Music Festival, and, in Boston, in the American premiere of the baroque oratorio, Il Figlio Prodigo by Camila de Rossi. In 2012 she also performed as solo harpsichordist at a special concert at the historic Auditorium Wanda Landowska near Paris and this past summer at the Metropolitan Museum of Art in New York and at the BEAT Festival in Brooklyn, NY. Christine is currently music director at Trinity Episcopal Church, Lime Rock CT and continues to lead Crescendo in its 10th anniversary year. Her upcoming project for April 2014 is the U.S. premiere of a Chilean Mass for choir and folk instruments, Misa Andina (1980) by Jaime Soto León.