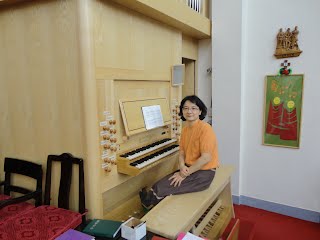 林淑娜(Lin, Shuna)Shuna Lin was born in Kaohsiung, Taiwan. She graduated from Cologne University of Music in Germany (Der Künstlichen Abschlussprüfung im Hauptfach in Köln). She received her diploma of Organ at Academy of Music (Orgel bei Hochschule für Musik). She also received an A-level certificate for Church Musicians at the Academy of Music in Cologne Evangelical Church（A-Exsame：staatliche Prüfung für Kirchenmusiker an der Hochschule für Evanheliche Kirchenmusik in Köln）（Zeugnis: A-Exsame）. Specializing in organ, piano, vocal music and choral conducting, as an organist, Lin learned from Professor Wolfgang Stockmeier. She obtained full-time German state church organist and conductor’s license in Level C (Urkunde & Zeugnis) in 1992.( In Germany, as long as a musician has passed the C-level test, the musician can be an organist or a pianist in the church and get paid from the state. Level A is the top.) After receiving her work permit, she had been a church musician,  playing organ, conducting adult and child choirs in Tersteegen Church for five years in Cologne.

During her study in Germany, while working part-time in a church, she was also employed in Waldorf Primary School in Dusseldorf (Düsseldorf Waldorf Schule) as a piano accompanist in Jaques Dalcroze’s “rhythm music”(Eurhythmics) lessons. She was also involved in a considerable number of choral repertoire of church music on video recording and radio experience with the conductors- Christoph Spering and Elke Masha Blankenburg. She played second organ to Christoph Spering in Cologne Grace Church(Köln Gnadenkirche), Peace Church (Friedenskirche), and Lutheran Church (Lutherkirche). Lin had performed solo recitals on the organ and choral conducting in Köln, Herten, Ierlohn, Rostock and Saarbrüken. She was especially known for her performances on the organ with mandolins, organ with orchestra, and series of performances on the organ with choirs.

Her published works are listed as follows:

Academic Papers in Theology and the Church:

Albert Schweitzer’s musical ideas about the impact of Wagner and Bach, Vol.35, No.2. June 2010.