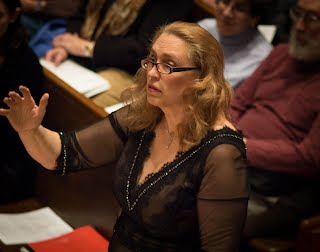 Recognized as one of America’s leading performers on early keyboard instruments, Gwendolyn Toth performs with equal ease on the harpsichord, lautenwerk, organ, fortepiano, and clavichord. Her interpretations have been acclaimed for their spirit and intelligence, and her technique is founded on historical performance principles of fingering, articulation, and phrasing. A prizewinner in the Magnum Opus Harpsichord competition and in American Guild of Organist competitions, she has been heard in concert throughout North America, Europe and the Far East, and on radio networks in Holland, Germany, France, and America’s National Public Radio. She has performed in festivals in Boston, Berkeley and Indianapolis, USA; Utrecht, Holland; Regensburg, Germany; Edinburgh, Scotland; Trevi nel Lazio Italy, and the Czech Republic.

As a soloist on historical organs, Ms. Toth has performed on the 1434 organ in Sion, Switzerland; the 1509 organ in Trevi, Italy;  the 1649 organ in Zeerijp, Holland; the 1696 Arp Schnitger organ in Noordbroek, Holland; and the 1714 organ in St. Michael’s Church, Vienna among many others.  On the Zefiro Recordings label she has a CD of organ works by Heinrich Scheidemann on the 1651 meantone organ in Zeerijp, Holland; a recording of Renaissance and early baroque organ music on historical Dutch meantone organs in Zeerijp and Krewerd(1531); and a recording of J.S. Bach’s Goldberg Variations performed on a lautenwerk, a reconstruction of Bach’s gut-strung harpsichord built by Willard Martin of Bethlehem, Pennsylvania and owned by Ms. Toth. Ms. Toth released her latest organ CD, music of Bach, Böhm, Scheidemann, Pachelbel, and Reincken on the Arp Schnitger organ in Noordbroek, Holland, in 2012.  Her next CD will be on the historic 1521 Oosthuizen organ in the Netherlands.

Ms. Toth also has an active career as one of only a few American conductors of historical performance ensembles and orchestras. Currently, she is the director and founder of New York City’s virtuoso period instrument ensemble, ARTEK. Under her direction, the ensemble released the first North American recording of Monteverdi’s opera,Orfeo, on the Lyrichord Early Music Series label, to outstanding critical acclaim. Other CDs include Love Letters from Italy, I Don’t Want to Love, Monteverdi’s Madrigals Book 5, and Solo Cantatas of Rosenmüller. Ms. Toth and ARTEK have toured throughout America and Europe with the Mark Morris Dance Group performing madrigals of Monteverdi. ARTEK has appeared most recently at the National Gallery of Art in Washington, DC and made its Lincoln Center debut in 2010. Ms. Toth has also conducted at Sadler’s Wells Theater in London with Mark Morris and his company, Skylight Theater in Milwaukee, Brooklyn Academy of Music in New York City, and for the German Radio Broadcasting system. Opera News honored her as an “Outstanding Young Conductor” in 1989. In 2001, she was honored as the first recipient of the “Newell Jenkins Prize” for excellence in early music performance.

Ms. Toth’s interests also extend to contemporary music. Ms. Toth has worked and recorded with eminent composer/performers such as John Cage, Rhys Chatham, Petr Kotik, Dave Soldier, Louis Andriessen, and Elliot Sharp at BAM Next Wave Festival, The Kitchen, Bang on a Can Festival, Cage Nachttage in Köln, Germany, and others.