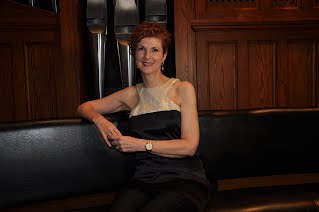 I feel very privileged to present myself among so many esteemed colleagues, and I am delighted to see that there are other Canadian women among them!

I was born and raised in Winnipeg, Manitoba, studying electronic organ for many years and achieving sufficient pleasure and success from my efforts that I never considered doing anything but music as a vocation. I was most fortunate to meet a brilliant organ teacher and mentor during my undergraduate years at the University of Manitoba. I enrolled in a Bachelor of Music program with no idea of which concentration I would choose; Lawrence Ritchey inspired me to choose organ performance and eventually to become a church musician, recitalist and pedagogue. It was his advice to seek a second degree in sacred music, which I did at Concordia University, River Forest, Illinois. My studies at these two institutions instilled in me a life-long interest in music education.

I work primarily as a church musician, serving as Organist and Director of Music at Holy Rosary (Roman Catholic) Cathedral in Regina, Saskatchewan. I preside over a fine, 3-manual Casavant organ (1992) of French Romantic design. We host guest recitalists at least once a year and I have opportunity for at least one annual recital myself, with many additional performance opportunities for my students. I oversee a 3-year Organ Scholar program which provides teenage students with formation in organ playing, accompanying and liturgy. It is the only program of its kind in Canada and has now produced many fine young organists for church work – and there always seems to be a need for capable church organists! The Organ Scholars make it possible for me to both play the organ and conduct the choir at Masses throughout the year. In addition to the small, amateur choir, I have recently started a Women’s Schola to sing for Feasts and Solemnities. This latter group, which is comprised largely of former Organ Scholars, sings mostly a cappella Renaissance motets and plainchant.

Besides parish Masses, we have responsibility for hosting Diocesan events such as Ordinations. For several years now, I have served on the Diocesan Liturgical Commission, where I am given complete autonomy in organizing and producing the music for such events. I have also served the Royal Canadian College of Organists for many years and in several roles, including National President. This has been a wonderful way to meet colleagues from across the country and to network with performers, teachers, composers and scholars. The College can be a lifeline for musicians living in smaller, isolated places and I consider myself fortunate to be part of that community.

In the last decade, I have enjoyed many opportunities to develop my skill as a continuo player and harpsichordist. I own a lovely, two-manual harpsichord from Yves Beaupré’s atelier, modeled on a design by Gräbner. Some of my most satisfying musical experiences have been playing Baroque music with my colleagues (including my husband, David, who plays Recorder). James David Christie is right in suggesting that organists can learn so much from paying attention to how other instrumentalists perform this music.

My first Schola, based at Campion College, University of Regina, began three years ago from a desire to introduce young Catholics to music of their cultural patrimony. As with my other Schola, this ensemble sings primarily Renaissance polyphony and plainchant in Latin. What began purely as an experiment, has proven enormously successful. Campion Schola has sung to critical acclaim and has a dedicated local following.

My first musical love was the organ, but I have learned that the instrument is only a tool for musical expression, not the end in itself. Too many organists forget this, or never learn it.  Communicating musical expression using other tools such as singing (solo, or in a choir), or playing in an ensemble, can really inform how we make music on the organ.  I hope to be able to impart this to my students and to share this with my audiences.