The Organ Music of Judith Bingham

Judith Bingham is one of Britain’s most decorated living composers. Among her honors are a handful of British Composer Awards, premieres by major choral groups including the BBC Singers, the BBC Symphony Chorus, and the Choir of King’s College, Cambridge, and countless prestigious commissions.  Trained as a professional singer, her music demonstrates a commitment to the melodic line.  While primarily a composer of choral music, Bingham has written for a wide variety of instrumentations, including a substantial body of organ music.  Her music is shaped by extra-musical sources of inspiration, among them nature and sacred subjects.

I first became acquainted with Judith Bingham’s music when I heard a British friend perform “St. Bride, Assisted by Angels” on a degree recital. Curiously, while Bingham enjoys celebrated composer status in her native country, her music is not well known in the United States. Since hearing “St. Bride,” I have performed that and another solo organ work, “Ancient Sunlight,” on a number of my own programs and notice that it often is the first time most audience members have heard any of Bingham’s music. An invitation to perform at the 2018 Gothenburg International Organ Academy in Sweden prompted me to explore more of Bingham’s music and to contact the composer herself.

There is so much that appeals to me about Judith Bingham’s music. I appreciate that she has found a way to write contemporary music that embraces consonance. To be sure, she often finds ways to insert a dissonant note or two into an otherwise consonant chord, using split thirds or added 9ths, 11ths, or 13ths, but dissonance does not rule in the way it does for some other contemporary pieces. Another appealing feature of Ms. Bingham’s music is that it draws on extra-musical sources of inspiration. This is “programmatic” music: music that tells a story or paints a picture. As such, Ms. Bingham’s music takes us on a journey; it never leaves us in the same place where we began. While she develops musical ideas and figures, she never repeats sections exactly. In this way, her music links to our own human experience of growing and moving forward.

On a personal note, as one who grew up hearing Bible stories in church and then later studying them through the lens of literature as a college student, I can relate to the way Ms. Bingham presents these stories. Hers is an undogmatic approach, and one that is fueled more by imagination and curiosity about the characters and situations. In one of her interviews with Marjorie Monroe-Fischer, she comments on her own spirituality and how it relates to her music: “My church music has been influenced by changing ways of thinking about Christianity. I’ve read an enormous amount about Christianity. I’m not really a committed Christian, but I am very, very interested in it…I like reading about it from different angles.”

The Virgin Mary makes frequent appearances in Ms. Bingham’s output for organ, and is most often connected to the scene of the Annunciation, where Mary learns she will be the mother of God. Of this moment, Ms. Bingham writes: “I’ve always been drawn to images of the Annunciation: partly because it seems such a pivotal moment – the Old Testament moves into the New at this moment, and there is an amazing sensation of apprehension present in the moment before the Angel Gabriel arrives. But has always seemed to me the perfect expression of female creativity on so many levels.” As a woman, this focus resonates with me. It wasn’t until I became a mother myself that I fully appreciated Mary’s joy as expressed in the Magnificat, or her sorrow upon witnessing her son’s crucifixion. There is something special about Ms. Bingham’s portrayal of female characters and the situations; I admire the freshness and humility with which she approaches these subjects.

Finally, one of the other things I value about Ms. Bingham’s music is her approach to the organ. Having grown up singing in church and cathedral choirs, Ms. Bingham has been around the organ for decades, but never took any formal lessons. As a result, her music shows an appreciation for the instrument without being bogged down by convention. Ms. Bingham also leaves all the orchestration of her organ works up to the performer, indicating only dynamics and occasional pitch levels in the score. Early in her career, Ms. Bingham realized that since every organ is different, it was best to let the performer make registration choices based on what sounded best on an individual organ. Making choices about color and orchestration is one of the most challenging and rewarding aspects of working with this music.

It is my hope that his brief article will inspire my colleagues to explore and program the music of Judith Bingham. At the bottom of the page you will find a YouTube video of my performance of “Ancient Sunlight,” resources for further reading, and a pdf with a list of Ms. Bingham’s organ works and discography.

I invite you to listen to one of my favorite works by Ms. Bingham, “Ancient Sunlight.” This piece was commissioned by the Birmingham City Hall for Thomas Trotter and performed by him at his 500th lunchtime recital on October 6th, 2003. This work takes as its inspiration Giotto’s three paintings in Scrovegni Chapel of Padua depicting the early life of the Virgin Mary, shown below.  The first movement, “Infancy,” is in the form of a quiet prelude.  Arpeggiated chords and a slow rising motive in the pedal are meant to sound “like an Aeolian harp,” conjuring up images of innocence and mystery.  The movement moves seamlessly into the aria that follows, a lyrical depiction of the young Mary at her betrothal.  The bluesy melody suggests a playful, and very human teenager.  At the close of this movement a rhapsodic flutter fast-forwards us to the point at which this young girl’s life ceased to be normal.  The final movement of the piece offers a musical portrayal of the Annunciation that is both exciting and frightening.  Fast figuration at the opening of the movement representing the flight of the heavenly host is soon interrupted by the announcement of Gabriel in the form of a festival trumpet.  The archangel must have been terrifying!  It is no wonder angels always preface their message with “Be not afraid!” The toccata concludes with fortissimo chords, to which the composer includes the text, “Ave Maria, gratia plena, dominus, dominus tecum.” I recorded this performance for a virtual concert at St. Paul’s Episcopal Church in downtown Syracuse, NY, to compliment a series of webinars on Composing for the Organ that we hosted at Syracuse University in September 2020. 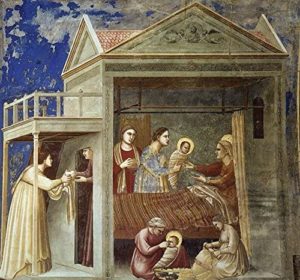 Aria: Betrothal (Giotto, Scene 5: The Marriage of the Virgin)