By Elisa Bickers
I am one blessèd organist.  I work with a church whose priorities include fostering healthy relationships, excellence in worship, and amazing educational opportunities.  We have 160 adults in our music ministry.  We have a sacred concert series.  We have a large pastoral staff, each of whom appreciates the art of music and those who make it.  And just this fall, we welcomed a brand new pipe organ to our chancel: Richards, Fowkes & Co. Opus 22.This organ sure is a beauty.  She sounds good and she looks good.  She completes a sanctuary renovation that corrected acoustical and visual problems, and she has been a long time coming.  Anyone who has ever been involved with a pipe organ project knows that these things are never simple.  The schedule never moves as swiftly as hoped.  The communication is never as clear as we think it is.  Whether it’s one person making decisions, or a committee, the hours of research are long and important.  There are sleepless nights when you worry about polity, and strained relationships between people that sometimes you fear will never heal.  It’s just a pipe organ, right?  But, of course, it’s so, so much more.  And so we fight the good fight and work as faithfully and tirelessly as possible… even when our faith has nearly run out, and we’re exhausted.It seems that to write a technical article about organ installation for an audience of organists wouldn’t be very helpful – what could I possibly share that you don’t already know?  They say that organs teach organists just as much as teachers do.  The same can be said of organ projects!  As I’ve looked back on this seven-year-long process, only just now entering its final phase (voicing!), I’ve become reflective on the lessons I’ve learned along the way.  And many of those lessons don’t have a thing to do with stop layout…  Here they are, in no particular order.

Lesson #1: It’s Actually Not ALL About the Pipe Organ, It Turns OutWhen you’re the organist, and you’re in the weeds trying to work with your committee to find the best builder, the right acoustician, a color that can please everyone, etcetera, etcetera, etcetera, it’s easy to put on blinders: all that’s in front of you is the organ.  But as any horse will tell you, taking off those blinders reveals a whole world filled with other wonderful things.  Like, why are you putting in a new organ at your church?  Because you want an even better worship experience.  And what’s so important about a superior worship experience?  It brings people closer to one another and closer to God.  It’s a setting where we learn, mourn, sing with joy, aren’t alone.  The organ is a tool.  Yes, it’s a big, expensive, endlessly complicated tool.  But it is a building block upon which far greater things are resting.

Lesson #2: When God Loses a Window, Sometimes He Gains a Dove

(loosely paraphrased from The Sound of Music)

Early, early on in our process, we were faced with a visual conundrum.  Our beloved sanctuary had an even more beloved round, clear window at its very front.  Because of said sanctuary’s shape and acoustic, it would be most beneficial if we put our new pipe organ right smack in front of that window…. losing it (from the inside) forever.  Oh, the hours we spent in committee talking about that window.  What would people say?  Surely some will leave the church…  Can we build the large, mechanical-action organ around this window?  (Short answer: no.)We spent so much time, and emotion, talking about that window – worrying about what the congregation’s response would be to its loss.  We also built a Welcome Center parallel to the sanctuary, and we put in not one, but two circular, clear windows there, to help cushion the anticipated blow from covering up the sacred one with a new pipe organ.  And do you know how many people barked and badgered about that covered window?Neither do I.  There may have been a rumbling here or there about it, but actually people seemed pretty comfortable sacrificing that important window in order to have an improved acoustical and organ experience.  And at the top of the pipe organ case, there will eventually be a carving of a descending dove, complete with nimbus around its head – gilded, of course.Sometimes we worry needlessly.  But, sometimes it’s our job to worry, and to ask every question, even the uncomfortable ones, or the ones that just barely need to be asked.  When you have a big responsibility on your shoulders, you owe it to those counting on you to be thorough.  The trick is to figure out just how thorough, for the sake of the project, but also for your own sanity.  That, it turns out, is a lesson I haven’t learned yet.

Lesson #3: Sometimes Someone Has to Crawl Into The Belly of the Pipe

We had twelve GIANT Filipino mahogany stopped pipes that we recycled from our old Möller.  We call them “The Twelve Apostles.”  They are BIG and they are HEAVY.  And removing them from the old organ, refinishing and repairing them, and then putting them back in the chancel to be used in the new organ was a tremendous process.  It required rigging, and I-beams, and scaffolding, and prayers, and many, many chefs in the kitchen.  At one point I came in to observe the progress and there they were: two forlorn organ builder legs sticking out of low E.  Poor Nate had drawn the short straw and had to dive into the belly of the pipe to retrieve the harness.  It was dusty, nasty work, for which we mocked him for several days.Every now and then, duty calls and you have to roll up your sleeves and get dirty.  More often than not, the results are stellar, and the process may even be a little fun. 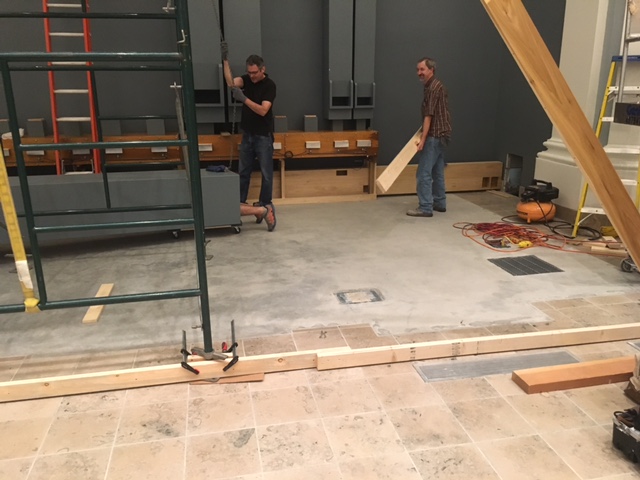 Lesson #4: God Is In the DetailsOpus 22 is a fantastic, miraculous machine-art-instrument.  Down to the meticulous joining, and each carbon-fiber tracker run, and the specially conceived font on the stop draw-knobs, her details are as stunning as her overall effect.  This being an organ built for a Kansas church, her carvings include stalks of wheat, Cottonwood leaves (the state tree), and, of course, sunflowers.  It’s our details that make us unique, and our ability to work together in community that makes us holy. 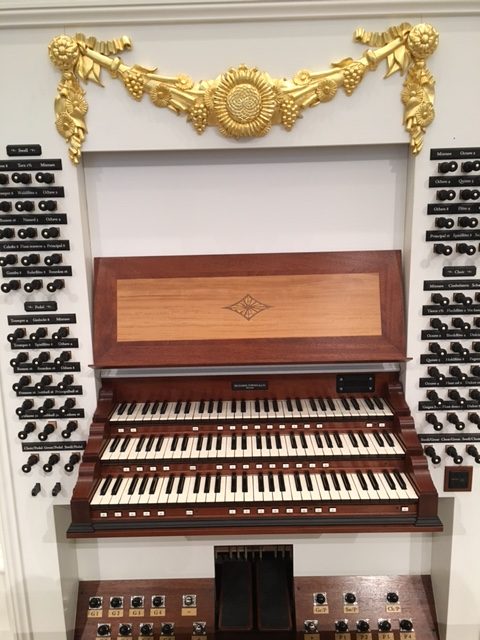 I taped strongly, but politely, worded signs at every entrance to our sanctuary: “Sanctuary is CLOSED for Pipe Organ Installation ☺.”  In an effort to keep organ builders and congregation members alike safe, happy, and healthy, I quarantined them for several weeks.  One evening, after chamber choir rehearsal, I announced to the singers that I was going into the sanctuary to look at the organ, whose façade had just that day risen from the floor like a phoenix from a flame.  And I invited them to join me for a closer look.  Of course, they jumped at the opportunity.Most singers climbed the flight of stairs and followed my careful trail through the organ parts that still littered our chancel.  We all oohed and ahhed at the tremendous work of art that stood before us.  Two singers that stood out to me, however, were our alto intern and her best friend, a paraplegic.  Our alto intern is not a large woman – actually, she’s quite slight of frame.  Her friend’s wheelchair couldn’t navigate the maze of organ parts.  Without hesitation our intern lifted her friend onto her back, and brought her up for the closer look.  It frequently falls to us, as women and as organists, to bring others closer for a better look at beauty.  It’s not immediately clear to everyone, the poetry of the liturgy, or the meaning behind the carefully placed ornaments in a Bach chorale prelude.  There’s some nasty stuff that can get in the way of seeing beauty; politics, social media, and many other things divide people and make them tense, eyes trained to the floor instead of toward the potential of the divine.  It’s our job – better yet, our calling – to gently hoist folks on our backs and show them something splendid.  Think of it as holy exercise.  You will only ever be stronger because of it, and the world will gain more eyes that are searching for the beautiful.

Lesson #6: Wandering In the Desert Actually Wasn’t So Bad

We removed our previous organ (“Ol’ Wheezy”) after the 2015 Easter services.  Opus 22 arrived September of 2017.  Therefore, I was a church pianist, not organist, for about a year and a half.  Leading up to this time (which I thought would be a much shorter period), I was filled with boredom.  Piano?  Ugh.  What fun is that?  No multiple manuals, no stops to change the color.  It’s all going to sound the saaaaaaame….Once I got to piano-land, however, riding in the desert on a Steinway with no name, I discovered a giant world of opportunity!  For one thing, my improvising had to shift… no longer could I rely on the many-splendored colors of the pipe organ to be my muse.  My explorations of timbre at the piano happened through touch and harmony, and commenced almost immediately.  Instead of dreading service playing at the piano, I relished in what new joy I might discover in my practicing, and as well as in the moment.  That was an unexpected perk of being without an organ for so long.

Lesson #7: It Just Won’t Do to Ignore Those Unvoiced Pipes

I played Opus 22 in the Richards, Fowkes & Co. shop when I attended the open house.  It was a wonderful moment, that first lullaby played on the Great 4’ flute.  I was smitten.Fast-forward to installation at the church.  After weeks of a towering but silent instrument in the front of our chancel, I finally had the chance to play the newly-placed Great 8’ and 16’ principals while the organ builders were at lunch.  I gingerly put my fingers on the manual, and played.  And the sound was comical.   You see, the winding wasn’t completely adjusted yet.  And the pipes hadn’t been voiced or tuned.  And some of the 16’ pipes were sitting in the wrong spots while the builders were working on something else.  And some pipes weren’t in at all.  So it sounded like the organ had the hiccups, and also was just a bit drunk.  I both relished in the potential of her melody, and cackled at the truly bizarre music that erupted from her.  I really hope no one was listening.On the first Sunday that we had church in our sanctuary after installation had begun, the organ didn’t look like an organ yet – more like a tree house.  The internal structure was exposed, and only a bit of the painted and gilded case was in place.  One of our very talented pastors, and my very best friend, Reverend Jenny McDevitt, worked this into her liturgy for the day.  She told us that an unfinished organ looks a lot like the human race: you can see that its structure is well thought-out and sound, and there are visible glimmers of beauty.  But it’s also obvious that there’s a lot of work yet to be done.  She went on to say that, just like this organ, we needed to live in the hope that some day the world would come together to make glorious harmony. 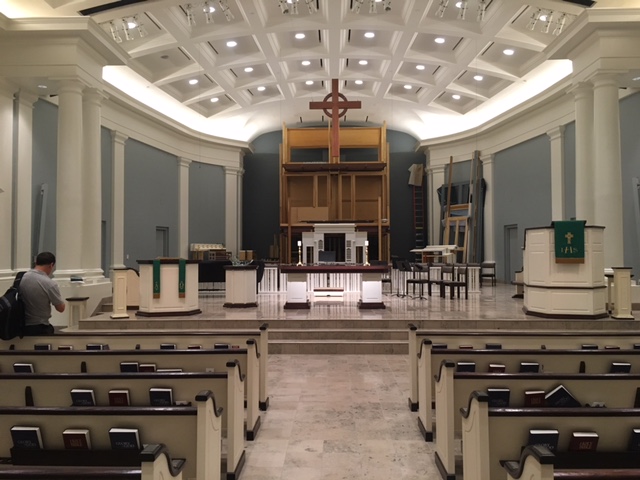 There are a lot of unvoiced pipes among us, and everybody gets knocked out of tune some time or another.  Our churches, concert halls, and communities are filled with broken people.  There are anger, fear, and many other brands of hurt all around.  To reach out and offer notes of healing and care is the most significant responsibility of our profession.      Village’s new instrument will be completely voiced by summer of 2017, and will be featured prominently at the 2018 AGO National Convention in Kansas City.  I hope you will all come hear and play her, and come to love her as I already do. 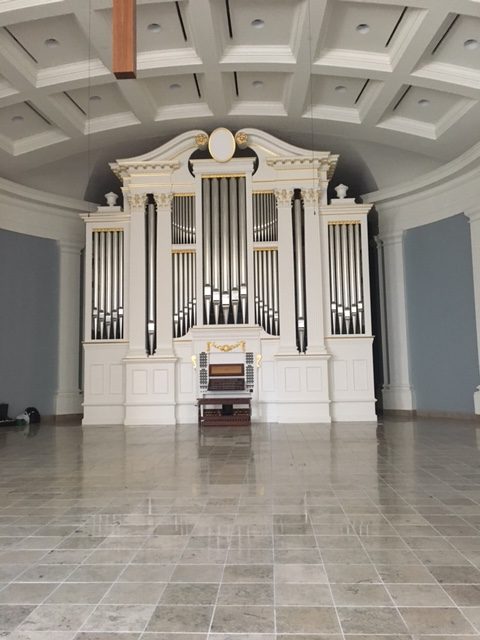