By Ann B. Caldwell, DMA

One of the highlights of my career as an academician and church musician was guiding a congregation in the restoration of its historic pipe organ. The instrument was built in 1895 by Henry Pilcher’s Sons of Louisville, Kentucky, for First Baptist Church of Milledgeville, Georgia. This tracker, or mechanical action, organ consisted of two manuals and pedal (flat, non-radiating) with seven ranks of pipes. In 1952 the growing congregation moved from the Wayne Street building to a new and larger building on Liberty Street. A three-manual Moller pipe organ was built for the new sanctuary, and the smaller Pilcher organ was installed in the chapel. It was housed in a closet-like chamber with only the keydesk and pedalboard exposed. The chapel was later converted to a choir rehearsal room, and the organ was seldom used. Eventually, no longer used or maintained, it became unplayable.
In 2003 an issue arose concerning the relocation of some air conditioning equipment. The location of the Pilcher organ was identified as the prime site. With that in mind, the congregation voted to establish a restoration fund and appoint a committee to steer the relocation and restoration of the organ. After some preliminary investigation, three organ-building companies were asked to submit restoration proposals and cost bids. All three builders strongly recommended relocating the organ to the sanctuary rear gallery, the only location with enough “head space” for it to sound properly. In that location it could once again be used in worship with instrumental or vocal ensembles in the gallery and for duets with the larger Moller pipe organ. Since the pipes would be exposed, it would also provide visual enhancement as it had in the older church’s sanctuary.

The committee studied all three proposals and bids, and eventually chose to contract with the firm of John Allen Farmer, Inc. of Winston-Salem, North Carolina. Mr. Farmer came highly recommended as a restorer of historic pipe organs. He is acknowledged as a specialist by the American Guild of Organists, the Organ Historical Society, as well as other organ builders. The contract was signed in 2005, and the instrument was dismantled and transported to the Farmer shop in January, 2006. Work began soon afterward, following the “Guidelines for Preservation” as established by the Organ Historical Society, Inc.

The project consisted of cleaning, repairing, and refinishing all existing parts and pipes, re-leathering the bellows, windchests, and pipe stoppers, constructing new casework and façade pipes missing from the original design, adding a new silent electric blower, and reinstalling the organ in the rear gallery of the sanctuary. More specifically, because the remaining part of the case was the original oak paneling surrounding the console area, all new upper and side casework would be constructed of matching quartersawn oak in the style of the original case. White paint would be removed from the existing console area and the keyboards recovered with legal ivory. The façade pipes, which by 1919 had been painted gold, would be stripped and repainted with the original stencil design.

A few years earlier, my interest in historic instruments led me to attend the pre- and post-restoration symposiums on the 1800 Tannenberg organ in Old Salem, Winston-Salem, North Carolina. It was here that I first learned of John Farmer. During those few days, I gleaned a wealth of information presented by expert after expert – American and European organ builders, historic instrument curators, and organ history researchers. One of those marvelous bits of information stood out foremost in my mind, and it was the factor that informed so many of the decisions in the Pilcher project. The essence of that idea is to honor the historic integrity of the instrument while restoring it to a viable, performing instrument, rather than adhering to pure, historic authenticity, yielding a “too-delicate-to-use” museum artifact.

After almost a year, the restoration was completed, and the organ was installed in the newly-modified rear gallery – all in time for the long-awaited rededication on Sunday, November 12, 2006. The Pilcher organ had become an artifact by default, but with the appreciation of a congregation and careful, informed decisions, it was resurrected to its intended function in worship, providing a glorious, tangible connection to the church’s rich history. 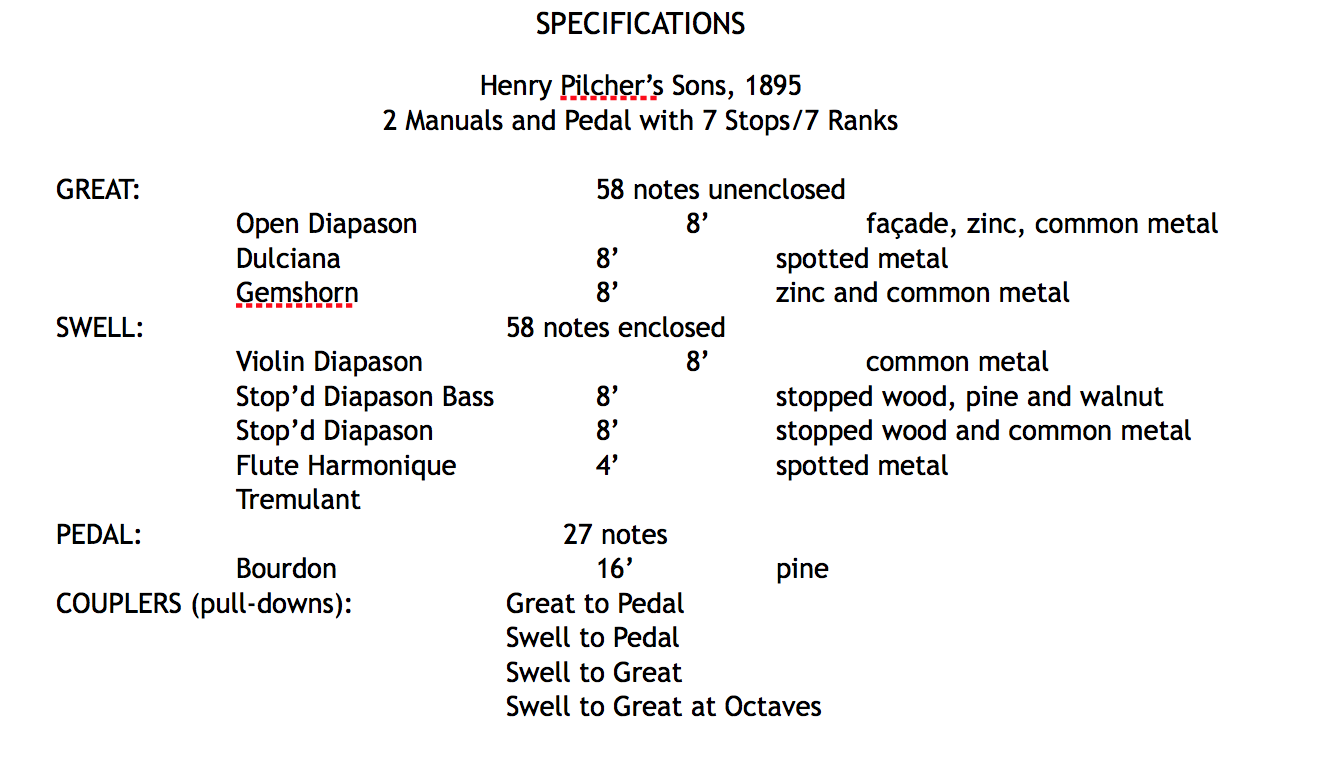