By way of introducing myself I offer an informal biography that describes my Edmonton, Alberta-based, somewhat eclectic career. A full-time faculty member in the Department of Music at the University of Alberta in Edmonton from 1988 to 2014, this year my class expands to include a thriving group of organ students at The King’s University (Edmonton); my moniker is Professor Emerita, University Organist at the University of Alberta and Adjunct Professor at The King’s University. I enjoy the great privilege of a career that includes performing nationally and internationally at conventions, organ festivals, on community and university concert series, in churches, cathedrals and concert halls as soloist, chamber musician and with Joachim Segger (Duo Majoya).My musical life began as a pianist; I entered the “organ world” after completing BMus (U Alberta), MMus (Eastman) and Performance Diploma (Mozarteum) degrees in piano. My mentors and teachers in organ studies, organist/composers Jacobus Kloppers (The King’s University) and Gerhard Krapf (University of Alberta) were both newcomers to Edmonton in the late 1970’s; they invigorated and inspired a continuing organ culture in the city. I was appointed Assistant Professor of Music at my alma mater soon after Gerhard Krapf retired and Jacobus (Kobie) Kloppers has been my esteemed colleague, friend and supporter through all the years; he retired from organ teaching at King’s in 2013. The University of Alberta was the first English-speaking Canadian university to offer the Doctor of Music degree in organ performance; I am the first graduate of that program.

I met my life and musical partner Joachim Segger during my undergraduate years. When I accompanied him playing Rachmaninov’s Second Piano Concerto and he accompanied me playing Chopin’s E Minor Concerto, the fireworks started.  Metaphorically speaking, the “music plane” soared to a new cruising altitude. We are fortunate to be continually inspired making music together and to tour together extensively. We play duets of all kinds: piano, two-piano, organ, organ and piano. Perhaps our most innovative works are the commissions and transcriptions for organ and piano, while the most satisfying and intimate music making is still piano duets. Joachim and I continue to commission and perform works for organ duet and organ and piano (over a dozen with four new works coming up for spring, 2015) while pursuing our individual teaching, performing and musical interests. New music is a common interest and we have each premiered respectable lists of solo works. We were inducted into the City of Edmonton Cultural Hall of Fame in June, 2014.

No doubt our best accomplishment is our two sons Mark and Chris. Mark is an innovative drummer who specializes in avante garde, improvisational jazz; Chris is lead guitar in the successful heavy metal band, Striker.

In order to facilitate connections to the broader world of organists and organ music for my students and myself I have continuously held leadership positions on local and national RCCO boards and committees. It has been a joy to meet and interact with a broad range of professional, amateur and community-minded organ/music enthusiasts through the years.

Most of my career has included teamwork as a church musician with Joachim Segger. We have had the opportunity of consulting for and overseeing the installation of a new organ in West End Christian Reformed Church, 1991; and of consulting for and overseeing the refurbishment and expansion of a hundred-year old Casavant at First Presbyterian Church, 2007. Both churches have grand pianos in proximity to the pipe organs, which provides opportunities for considered and adventurous explorations of playing these instruments together. The CD, Dancing Ice (1993), was recorded on the Létourneau organ in West End CRC. Its all-Canadian program includes solo and duet organ music (with Joachim) as well as an organ concerto with orchestra. Duo Majoya’s first organ and piano duet CD, Transcriptions for Two (1999) was also recorded in West End (please see www.duomajoya.com/recordings for information on all of our CDs). 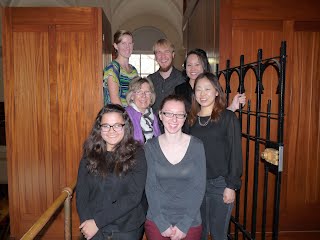 I had the great pleasure of serving on the organ selection committee for the Davis Concert Organ at the Winspear Centre for Music, and took part in the inauguration in 2002. In September, 2012, the tenth anniversary of the organ, Duo Majoya performed four premieres now published on YouTube. Canadian composers for that concert were Barrie Cabena, Rachel Laurin, Ruth Watson Henderson and Jacobus Kloppers; works for organ duets and for organ/piano.The most recent organ for which I consulted and fundraised is the Krapf Memorial Continuo Organ built by James Louder that was acquired by the University of Alberta in 2011. Gerhard Krapf consulted for the teaching and performance organ in Convocation Hall, a 1978 three- manual mechanical action Casavant, as well as the 1982 Brunzema practice organ. In 2010 a former student of Gerhard’s donated to the university the 1978 Casavant that was built for her home at the same time as the Con Hall organ. It became my studio organ, a most welcome gift!

Some highlights for the coming season? This fall I look forward to being a jury member for the Canadian International Organ Competition in Montreal. With former students I will be performing in an organ concert at the Winspear Centre for Music on October 27th called “Edmonton Women Organists”. In spring, 2015 I will play Ligeti’s Volumina for the first time and Duo Majoya will premiere two commissioned works by Edmonton Composers on a combined RCCO/ New Music Edmonton concert.