Laura Angélica Carrasco Curíntzita was born in Mexico.   She began her musical studies there, continuing them in the USA.   She received her master’s degrees in piano accompanying at Shenandoah University in Virginia, and in organ performance at the North Carolina School of the Arts [NCSA].   After that, she continued with doctoral studies at the Eastman School of Music of the University of Rochester, New York.   She received her doctor of musical arts degree in organ performance at the University of North Texas [UNT] in the studio of Dr. Jesse Eschbach.   Previously, she had studied organ with John E. Mitchener and Hans Davidsson, having also performed in masterclasses by Guy Bovet, James D. Christie, Roberto Fresco, Jean Guillou, Hannfried Lucke, Rudolph Lutz, Pamela Ruiter-Feenstra, and Luigi F. Tagliavini.

Laura Carrasco has been soloist (organ, harpsichord and piano) with the symphony orchestras of Aguascalientes, the Autonomous University of Chihuahua, Coyoacán, Michoacán, Guanajuato, Yucatán, and “Carlos Chávez”, as well as with the Philharmonic Orchestra of Jalisco, the Camerata de Michoacán and the Chamber Orchestra of the University of Michoacan.   She also has appeared as soloist with the NCSA Percussion Ensemble and the UNT symphonic wind ensembles.

Laura Carrasco gave the first performance in the USA of the complete Mexican Organ Book attributed to Joseph de Torres (18th. Century), Versos for organ by José A. Gómez (19th. Century), and organized in Mexico the first continental performance of the recently rediscovered Gloria by Handel.   She also premiered in Latin America the organ concerto by Howard Hanson.   She was twice winner of the annual baroque performance competitions of Winchester, Virginia, and has received top prizes in competitions held by the Symphony Orchestra of Michoacan, and the Philharmonic Orchestra of Jalisco, Mexico.   She is the featured soloist in the CDs of Miguel Bernal’s Concertino for organ and orchestra (Warner) and in Carlos Vidaurri´s Music for a revered image (Itinerant Records).

Laura Carrasco has performed as solo recitalist and member of the Trío Morelia (along with her siblings) in Austria, the Czech Republic, France, Germany, Italy, Japan, Liechtenstein, Spain, and Switzerland, besides Mexico and the USA (including the Bach-Handel Festival in Virginia, the L’Organo Series of the Piccolo Spoleto Festival in South Carolina, and the Women in Music Festival in New York).

Laura Carrasco has worked as professor at the University of Michoacan, Las Rosas Conservatory, and she currently teaches at the Institute for Sacred Music in Morelia, Michoacan, Mexico.   www.triomorelia.com 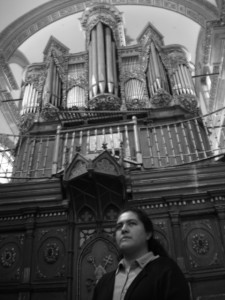 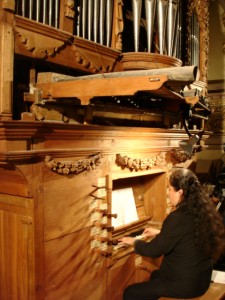